(Big League Politics) – Former Donald Trump political advisor and Republican operative Roger Stone announced that he intends to pursue a lawsuit against the Justice Department on Thursday. Stone made the announcement on Parler on Thursday, just hours after receiving a full and unconditional presidential pardon from Trump. Stone had been railroaded by Robert Mueller’s Russia conspiracy investigation, being convicted on the sole process crime of lying to the House Intelligence Committee. 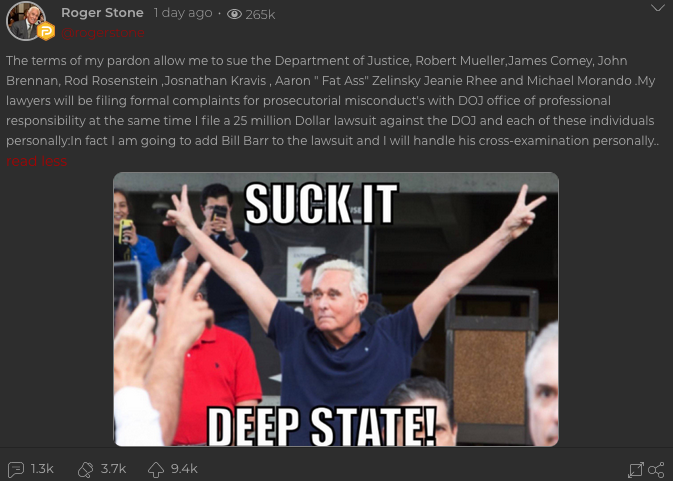 “I have an enormous debt of gratitude to God almighty for giving the president the strength and the courage to recognize that my prosecution was a completely, politically motivated witch hunt and my trial was a Soviet-style show trial,” said Stone of the pardon.

Stone may seek to demonstrate malicious prosecution and politically-charged violations of his civil rights in a tentative litigation strategy. Stone was arrested in a dubious pre-dawn raid, with armed FBI agents arriving at the Republican “dirty trickster’s” house in coordination with the media, including CNN. If Stone could subpoena any and all law enforcement collusion with the liberal media, he could potentially make a case that the charges were colored by an undue desire to publicize criminal proceedings against him.

Stone was exclusively convicted of a process crime, obtained by an investigation since to have been exposed as colored with political bias and fraudulent origins. Obtaining a judgement against the Justice Department isn’t common, but Stone stands a chance.