(Big League Politics) – CNN’s ratings have suddenly and sharply declined following the inauguration of Joe Biden, with the mainstream media channel suddenly losing anything interesting to talk about.

CNN has declined to scrutinize any of the sitting president’s policy positions or his governance, opting instead to inform its audience that everything is okay and that there’s nothing to worry about under establishment governance.

Figures from Nielsen reveal that CNN’s ratings have been cut in half since the start of the month. 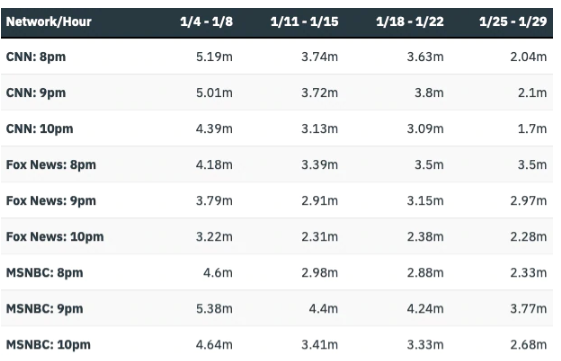 Brian Stelter has even claimed that politics has become “boring” following Biden’s ascension, attempting to make a weak excuse for the channel’s reversion to the ‘sleepwalking’ editorial style it practiced throughout most of Obama’s presidency. CNN’s daytime programming has lost most of its audience, and primetime hosts such as Chris Cuomo appear to be losing millions of viewers by the week.

Fox News incurred a decline in its ratings following the election, with many viewers incensed over its coverage of election fraud allegations. However, the channel has held onto market share more so than MSNBC and CNN, in great part because of primetime host Tucker Carlson.

Without the draw of President Donald Trump, mainstream media entities such as CNN may become little more than Pravda-style programming with occasional hysteria over colorful Republican office holders such as Marjorie Taylor Greene. Industry leaders have predicted that mainstream media networks will suffer serious declines in their audiences in coming years, and it’s possible that the garden-variety liberal channel could ultimately be quietly placed into liquidation.