(Big League Politics) – Thomas Binger, the Kenosha County Assistant District Attorney who spearheaded the failed railroad prosecution of Illinois youth Kyle Rittenhouse, is flagrantly violating Wisconsin legal rules of conduct regarding statements of a defendant who is adjudicated not guilty.

Binger delivered a condemnation of Rittenhouse in statements provided to the Chicago Tribune, continuing to accuse the exonerated youth of being a murderer. 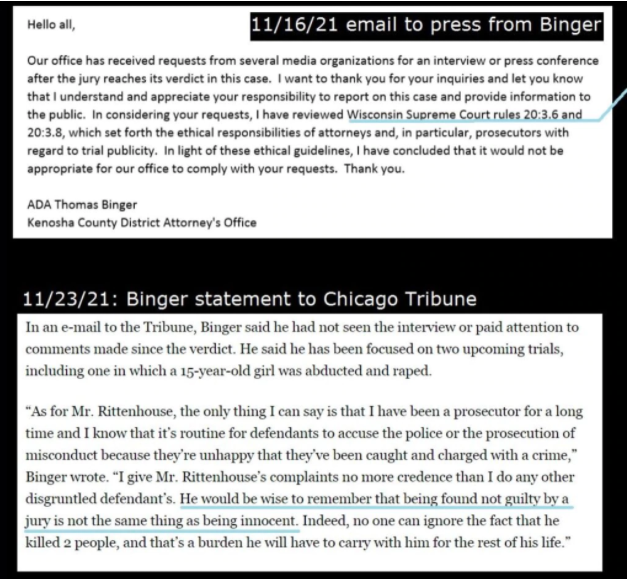 However, when asked to comment about the Rittenhouse trial after its conclusion by other, independent media outlets, Binger cited Wisconsin Supreme Court Rule 20:3.6. The rule for prosecutors bars them from re-trying acquitted former defendants in the media, limiting prosecutors to their proper realm in a court of law.

“A lawyer who is participating or has participated in the investigation or litigation of a matter shall not make an extrajudicial statement that the lawyer knows or reasonably should know will be disseminated by means of public communication and will have a substantial likelihood of materially prejudicing an adjudicative proceeding in the matter.”

The selective application of prosecutorial ethics may break down along partisan lines, with Binger anticipating favorable coverage from the establishment media Chicago Tribune.

Ironically, with Binger attempting to rebuke Rittenhouse for pointing out the flurry of prosecutorial misconduct that had emerged from his office in the homicide trial, he proved that he himself is personally willing to ignore codes of ethics and judicial standards that apply to prosecutors.

Commentators and legal analysts have called for Binger’s disbarment in the wake of the trial, with the assistant DA implicated in hiding evidence, coercing witnesses into delivering statements favorable to the prosecution, and repeatedly ignoring court orders from a judge regarding admissible evidence in the trial.