(Big League Politics) – Sen. Lindsey Graham (R-SC) was booed by his own constituents for shilling for the experimental COVID-19 vaccine during a recent grassroots event.

The video shows Graham repeating the Big Pharma propaganda lines verbatim while conservatives are no longer having it.

“If you haven’t had the vaccine you ought to think about getting it because if you’re my age,” Graham said before getting cut off by boos.

Graham attempted to backtrack in order to push his vaccine propaganda to the audience.

“I didn’t tell you to get it. You ought to think about it. Well, I’m glad I got it. 92 percent of the people in South Carolina hospitals have been unvaccinated,” he said before the crowd turned on him yet again.

The clip can be seen here:

Lindsey Graham booed and jeered for pushing the vaccine pic.twitter.com/euFWKrPqgN

It should come as no surprise that Graham is shilling for the experimental COVID-19 vaccine relentlessly considering the thousands of dollars that Pfizer has dumped into his coffers throughout his many decades in the swamp, as radio host Stew Peters revealed:

Big League Politics has reported on how the COVID-19 vaccine failed to prevent Graham from contracting the virus but did not stop his relentless shilling campaign for the jab: 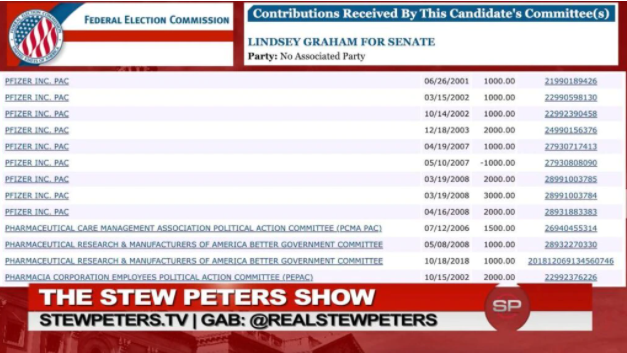 “Sen. Lindsey Graham (R-SC) is praising the COVID-19 vaccine even though it completely failed in preventing him from contracting the virus.

Graham joins the many people who obeyed Big Pharma, lined up for the experimental COVID jab, and then contracted the virus anyway. He nevertheless is praising the vaccine, claiming without any evidence that it prevented him from becoming more sick with the virus.

“I feel like I have a sinus infection and at present time I have mild symptoms,” said Graham in a tweet, who will now be quarantined for 10 days.

“I am very glad I was vaccinated because without vaccination I am certain I would not feel as well as I do now. My symptoms would be far worse,” he added…

Graham was recently on a party boat with Sen. Joe Manchin (D-WV) and several other lawmakers. It is believed that this boat adventure may have been a super-spreader event, and who knows what type of lascivious behavior Graham was doing on the boat to contract the virus.”

Graham has been one of the worst RINOs for many years, and his brownnosing of Trump is no longer fooling the conservative grassroots.