(Big League Politics) – Democrat Wisconsin governor Tony Evers has announced the authorization of roughly 500 Wisconsin Army National Guard troops Friday to post up outside Kenosha, Wisconsin. Evers’ move comes in response to possible instability in the aftermath of the Kyle Rittenhouse verdict. Rittenhouse faces three homicide charges and other charges for shooting left-wing agitators. Rittenhouse maintains that he was defending himself against potentially lethal left-wing attackers. The National Guard will only engage if local law enforcement requests that they spring into action, and Governor Evers’ press release makes clear that the National Guard cannot “impede” so-called peaceful protest or media reporting, and Evers’ statement encourages people to “peacefully” protest.

“We continue to be in close contact with our partners at the local level to ensure the state provides support and resources to help keep the Kenosha community and greater area safe,” said Evers, according to TMJ4.

“The Kenosha community has been strong, resilient, and has come together through incredibly difficult times these past two years, and that healing is still ongoing. I urge folks who are otherwise not from the area to please respect the community by reconsidering any plans to travel there and encourage those who might choose to assemble and exercise their First Amendment rights to do so safely and peacefully,” the Wisconsin governor stated.

Wisconsin’s adjutant general Major General Paul Knapp said the National Guard is ready to support communities. “In close coordination with the governor, we have assembled approximately 500 soldiers to help keep the Kenosha community safe, should a request from our local partners come in,” Knapp said.

Closing arguments in the high-profile Rittenhouse trial are expected to occur on Monday, with jurors beginning deliberation soon after. 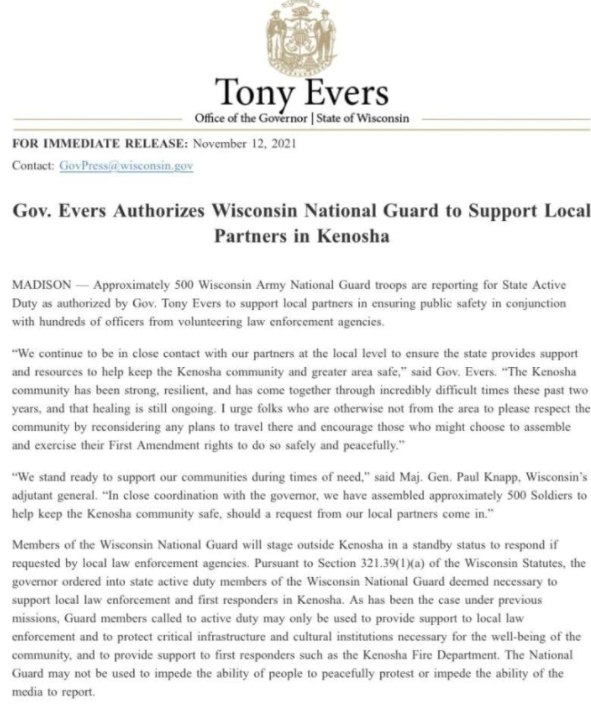