The Thursday Fox poll shows McAuliffe trailing Youngkin by seven percentage points, 45% to 53%. Only two percent of voters are undecided, suggesting Youngkin has a firm grasp on the hotly followed election, scheduled to occur next week.

Fox is generally considered one of the more reliable political pollsters, and an earlier October poll showed McAuliffe leading the election- suggesting that Youngkin has surged in the wake of a series of controversies implicating Democrats in the state, such as the Loudoun County school board’s cover-up of a sexual assault committed by a transgender student in a girl’s bathroom.

Polling conducted by the Washington Examiner also indicates that Youngkin is leading McAuliffe by four percentage points. The Virginia gubernatorial election is scheduled for Tuesday, with McAuliffe increasingly reliant on colorful allegations of “racism” on the part of his Republican opponent.

Virginia is a generally blue state thought to have become lost to Republicans as its socio-economic model was altered by federal government employees and corporations seeking proximity to Washington DC. If Republicans prove successful in flipping the state’s gubernatorial palace, it may prove the party has a path back to regaining power in other states that have swung blue, such as Arizona and Michigan. 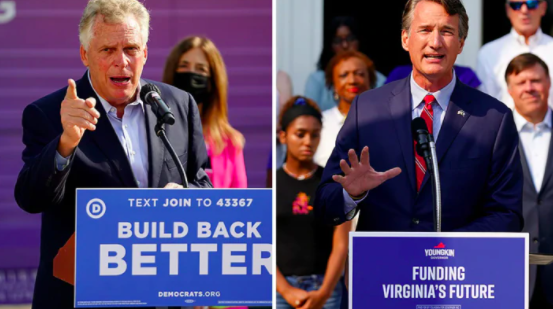