(Big League Politics) – Citizen activists expressed their displeasure with Democratic stonewalling of $2,000 checks on Thursday night, vandalizing and spray-painting none other than the house of Speaker Nancy Pelosi herself.

The artists left a message demanding $2k, stating that “we want everything.” They also demanded that Pelosi “cancel rent.” 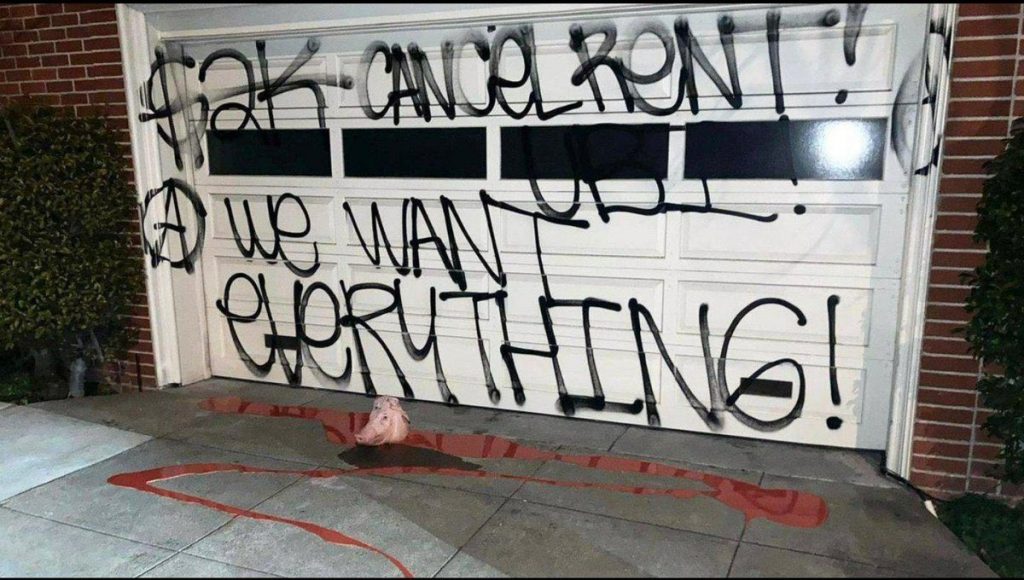 Police responding to the scene of the vandalism in San Francisco’s El Presidio neighborhood are reportedly attempting to cover up photography of the act. A vandalism call was made to the police at 3AM Friday morning.

It appears as if what looks like a pig’s head and blood was also placed in front of what is Pelosi’s garage.

Republican Senate Majority Leader Mitch McConnell has offered Democrats a legislative package that offers $2k checks to most American taxpayers, in return for the repeal of Big Tech’s Section 230 monopoly protections and the commission of a comprehensive 2020 voter fraud investigation. Pelosi has signaled she doesn’t intend to accept such a proposal, denying middle-class Americans much-needed relief funds that President Trump has indicated he supports.

It was only a matter of time until Americans beleaguered from the coronavirus recession took matters into their own hands, acting peacefully to remind Pelosi of the need to discount political considerations in delivering much-needed coronavirus relief.

Pelosi, who has served in Congress for decades, lives in an ultra-affluent San Francisco enclave that was the only neighborhood in the progressive city to be expressly racially segregated into the late 1940’s when the Supreme Court banned so-called restrictive covenants in housing.