BREAKING: The Numbers Are IN – Trump Gets HUGE News

The polling, from Emerson College, reveals that President Trump maintains 67% support from national Republicans. With the closest primary competitors receiving 10%, it appears to almost be a locked assurance that Trump will be the Republican Party’s nominee if he opts to join in 2024, aiming to become the first President since Grover Cleveland to serve non-consecutive terms. 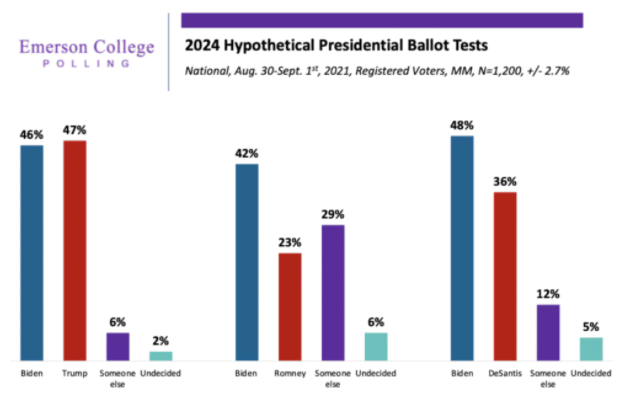 The polling also reveals former President Trump as the most competitive Republican against Joe Biden, tentatively defeating the 78-year old in the popular vote in a hypothetical 2024 rematch. Alternative Republicans such as Ron DeSantis and Mitt Romney fare miserably against Biden, losing by margins well above the poll’s margin of error.

The disastrous handling of American withdrawal from Afghanistan has damaged Democratic polling prospects, with Democrats fretting about dwindling liberal enthusiasm before the 2022 midterm elections. Emerson’s poll, which surveyed 1200 national voters between August 30th and September 1st, revealed that American voters blame globalist neocon President George W. Bush for the War in Afghanistan more than anyone else.

President Trump has indicated that he’s already decided whether or not he’s going to run for President in 2024.