BREAKING: Top Conservative Gets BANNED For This “Offensive” Post…

(The Post Millennial) – The Daily Wire host and political contributor Matt Walsh has been suspended from Twitter over his tweets about transgenderism.

On Friday night, Twitter issued a suspension on Walsh’s account after he made a series of tweets about recognizing biological realities over “gender identity.”

“The greatest female Jeopardy champion of all time is a man,” Walsh wrote. “The top female college swimmer is a man. The first female four star admiral in the Public Health Service is a man. Men have dominated female high school track and the female MMA circuit. The patriarchy wins in the end.”

The tweet has since been removed from the platform for violating the platform’s rules on “hate speech.”

In another tweet, which was also censored by Twitter, Walsh wrote, “I am not referring to an individual person as if she is two people. Everyone else can run around sounding like maniacs if they want but I will not be participating. No thank you.”

Twitter informed Walsh that his tweets erring against the approved narrative on gender identity and biology earned him a 12-hour ban – but the clock will only start once he agrees to delete the tweets that Twitter has already gone ahead and censored.

The tweets that Twitter instructed him to agree to delete can be seen below. 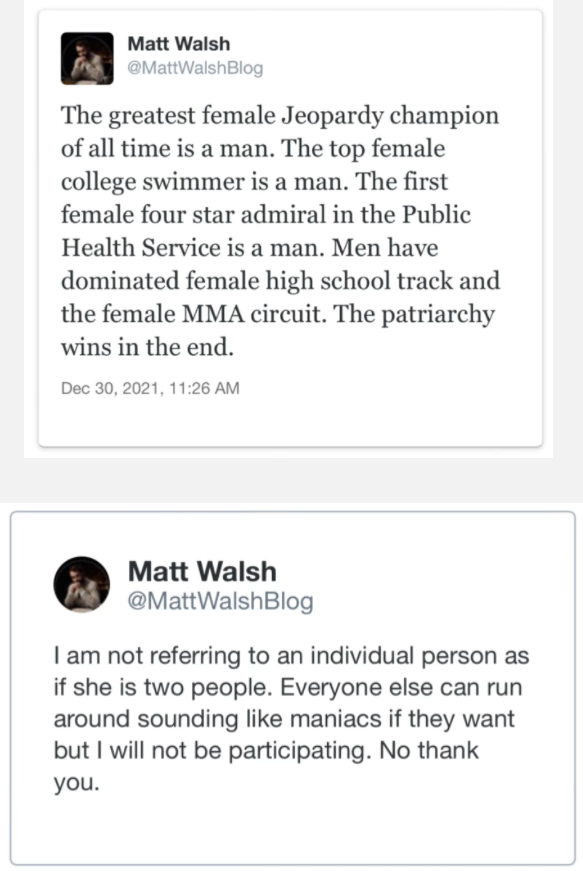