(Big League Politics) – Sarra Tekola, the ASU PhD candidate and Black Lives Matter (BLM) activist who was recently seen harassing two white students for having a “Police Matter” shirt and for ‘studying in the multicultural center while white’ appeared to have previously hd her own official profile on the Arizona State University (ASU) website, with the school quietly removing the link after the incident.

🚨 This insanity is happening on college campuses pic.twitter.com/BrVxICZYqP

This comes after the university’s widely considered weak statement regarding the incident, which failed to condemn the aggressor in any certain terms.

“The Dean of Students Office is aware of the disagreement between a handful of students that was captured in a video circulated on social media,” said the statement.

“The Dean of Students Office will be discussing it with all involved. ASU is a community of more than 100,000 people from all 50 states and more than 150 countries. Differences of opinion are part of the university experience. The university expects respectful dialogue between students in all engagements.”

Big League Politics was able to uncover some previews of Tekola’s ASU profile page that can be seen below. 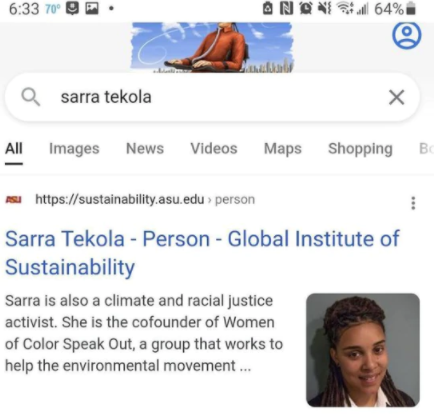 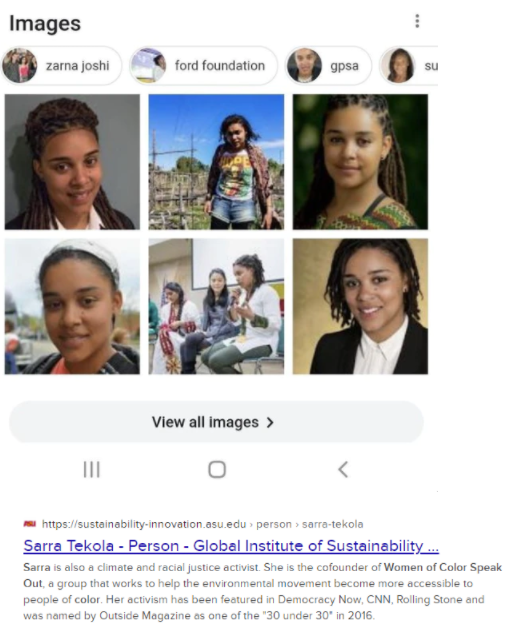 The ASU website describes Sarra as a “climate and racial justice activist” and details further political involvement of her’s, including that she help co-founded the group Women of Color Speak Out, a far-left organization that appears to have since disbanded.

Tekola’s history of political activism seems to be quite multifaceted, with a Fox News report detailing an event in which Sarra and others were arrested at a BLM rally in Downtown Phoenix following their refusal to clear blocked intersections that were causing delays to emergency service vehicles. One of the protestors arrested at the same rally was found to have two loaded guns upon the arrest.

The BLM activist and PhD candidate has also been seen making presentations on her far-left activism within academia, including an anti-capitalism speech she gave at the University of Washington, Seattle on behalf of her now failed “Women of Color Speak Out” organization.

Big League Politics has reported on even more discoveries following Tekola’s viral incident as well, including her involvement with the Ford Foundation, which has $16 billion in endowments and influence throughout numerous aspects of government and big business.