(The Post Millennial) – Satirical site The Babylon Bee’s offical Twitter account was suspended from the Big Tech platform on Sunday for “hateful content” after posting a joke making fun of US Assistant Health Secretary Rachel Levine, a biological male who identifies as transgender. The joke called Levine the satire website’s “Man of the Year.”

The Babylon Bee CEO Seth Dillon announced on Sunday he received notice that the site’s Twitter account has been locked out for “hateful conduct.”

In the notification to The Babylon Bee received Sunday at 5:42 pm, Twitter said the account has been locked for “violating the Twitter Rules” against “hateful conduct.” The message said the hateful conduct policy stipulates that Twitter users “may not promote violence against or directly attack or threaten other people on the basis of race, ethnicity, national origin, caste, sexual orientation, gender, gender identity, religious affiliation, age, disability, or serious disease.”

“We’re told our account will be restored in 12 hours, but the countdown won’t begin until we delete the tweet that violates the Twitter Rules,” he tweeted.

I just received this notice that we’ve been locked out of our account for “hateful conduct.” pic.twitter.com/udMriKcDr6

At the time of publication, The Babylon Bee’s tweet mocking Levine that was posted March 16 remains online. It had garnered over 12,000 likes. 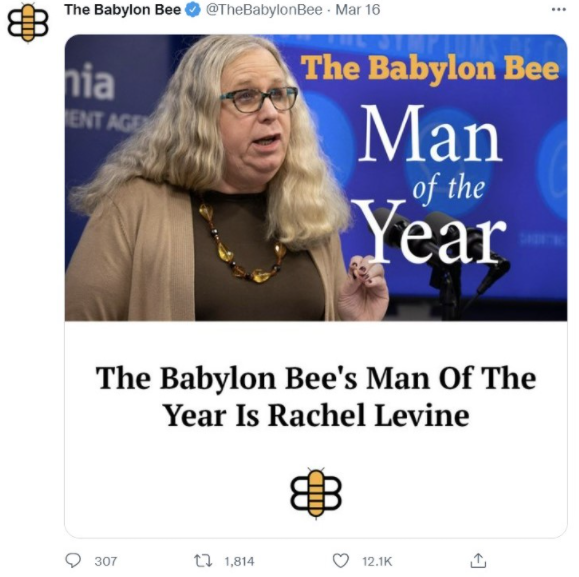 Republican Rep. Jim Banks and GOP Congresswoman Marjorie Taylor Greene were also censored by Twitter back in October for stating that Levine is “a man.”

That month, Levine, who was picked by President Joe Biden, became the “first-ever female” four-star admiral and the “first openly transgender” four-star officer in Public Health Service. In an Oct. 19 press release, the Department of Health and Human Services (HHS) described Levine’s swearing-in ceremony as a “historic announcement” that “builds on the accomplishments of LGBTQ+ History Month” and “a major step forward as we work to create a more inclusive society.”