(Big League Politics) – Sen. Kelly Loeffler (R-GA) is fighting for her political life with a hotly contested run-off election less than a week away, and Twitter is allowing fake news on their platform designed to hurt her chances.

Her weaselly Democrat opponent, Jon Ossoff, has claimed publicly that Loeffler “campaigned with a Klansman.” This is a blatant falsehood, but Twitter is doing nothing to stop the fake news from spreading.

Jon Ossoff falsely claimed in a viral tweet that Kelly Loeffler "campaigned with a klansman." Twitter tells me that this tweet doesn't fit under its categories for misleading info — and that Twitter is not going to be “the arbiter of truth."https://t.co/GmliXiD7A1

Twitter spokesman Trenton Kennedy said to the Daily Caller that this smear is not against their terms of service. She says that the lie does not fall into their focus of “synthetic and manipulated media, COVID-19, and Civic Integrity.” She says that “making a claim about someone happens in political speech all the time.”

“Making a claim about someone and their character wouldn’t fall under any of those policies,” Kennedy said.

Ossoff has used a picture of Loeffler with a former Klan leader to exaggerate their ties and spread falsehoods with the election around the corner. Twitter has actively become a political actor, helping Ossoff launder the fake news, in what could be seen as a form of electoral interference.

Twitter is claiming that they do not want to be the “arbiter of truth.”

Fact check: there is someone ultimately accountable for our actions as a company, and that’s me. Please leave our employees out of this. We’ll continue to point out incorrect or disputed information about elections globally. And we will admit to and own any mistakes we make.

Twitter has censored President Trump often for trying to expose the vote steal and the ongoing coup against the Bill of Rights and Constitution, as Big League Politics has reported:

Twitter nuked a tweet from President Donald Trump on Tuesday night, in which the President assailed what he called a Democrat election steal. Results of the 2020 presidential election are still unclear as of Tuesday night, with the elections of critical swing states Arizona, Michigan, Wisconsin, Pennsylvania, Georgia and Nevada still undetermined.

A tweet from the President accusing Democrats of stealing the election through wide-ranging and questionable post-election ballot returns was placed under a censorship button, although it’s visible with a disclaimer. 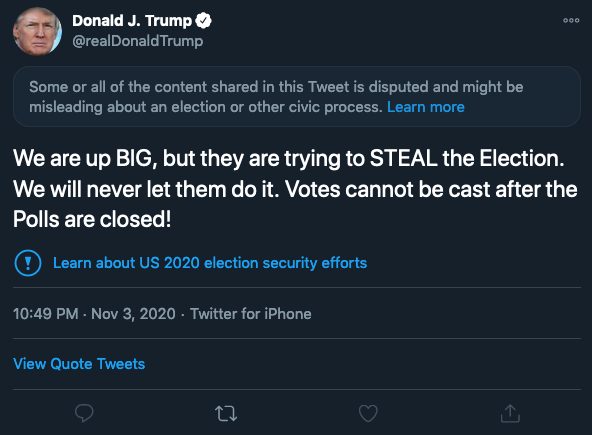 President Trump also said that he was up in the election, promising to make a statement to the American people.

It’s incredibly dangerous for the Silicon Valley tech company to censor a statement from the President of the United States on the night of an election. The results of the election are unclear.

Twitter declined to do anything about tweets from Joe Biden that occurred at the same time, leaving a tweet in which Biden claimed he was on the way to winning the election in place.

Twitter must be nationalized, or forcibly shuttered, before it can do more damage to politics and society as a whole.