(The Post Millennial) – Wikipedia editors took down the entry for Hunter Biden’s investment firm Rosemont Seneca Partners on Wednesday, deciding it was “not notable” and that keeping up the page was “a magnet for conspiracy theories about Hunter Biden.” 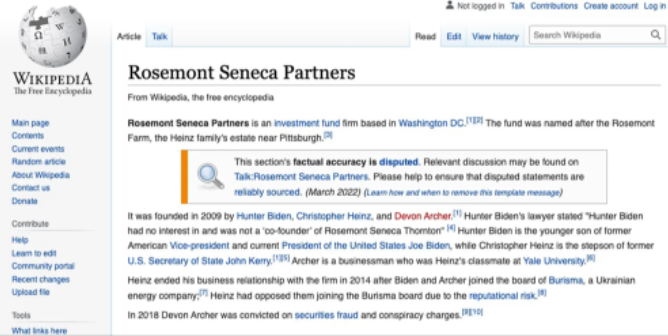 Archived comments from its Talk Page reveal the reason for deletion.

“Not notable,” determined a Wiki editor identified as Alex. “This organization is only mentioned in connection with its famous founders, Hunter Biden and Christopher Heinz, from whom it cannot inherit notability per WP:NORG. Every single source is a trivial mention in an article about the founders; that means it fails WP:GNG as well. Keeping it around additionally risks WP:BLPVIO, as this is a magnet for conspiracy theories about Hunter Biden,” the Wiki editor wrote.

The New York Post in a Saturday article describes the deleted Wiki page as being “thin on details and in bad need of an overhaul,” but “did provide information about the company’s founding by Hunter Biden, Devon Archer and Chris Heinz.”

Wikipedia co-founder Larry Sanger has said he feels the website is no longer trustwory and has morphed into “propaganda” for the left-wing “establishment.”

Claims of a double standard are also being made by many vocal critics of how Wikipedia is being run in today’s day and age: “If a Trump-linked company had its Wikipedia page wiped or one from the Russia probe, it’s more than a safe bet to say that CNN would be dedicating multiple reporters to following the internet trail,” said Curtis Houck, the managing editor of the Media Research Center.

SHOCK: Over Half of California’s 2022 Mail-In Ballots Are Still Unaccounted For