(Big League Politics) – Rep. Dan Crenshaw (R-TX) is lying about his support of red flag laws, claiming that he never supported the heinously invasive measures against the 2nd Amendment of the Constitution.

“I don’t support red flag laws. Trump did. I made the mistake of trying to explain why you should only talk about RFL at the state level and how to protect due process if you do. But would never support a single RFL in existence,” he said in a Twitter post on Aug. 27. 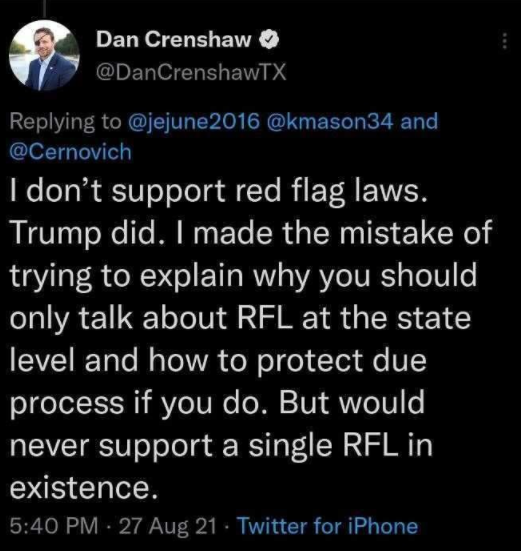 However, Crenshaw explicitly supported red flag laws in opposition to the 2nd Amendment in Aug. 2019 when he felt it was advantageous to his political stardom in doing so. This was as the fake news media was whipping the public into a frenzy over two mass shootings that had just occurred.

“The solutions aren’t obvious, even if we pretend they are. But we must try. Let’s start with the TAPS Act. Maybe also implement state “red flag” laws, or gun violence restraining orders. Stop them before they can hurt someone,” he said. 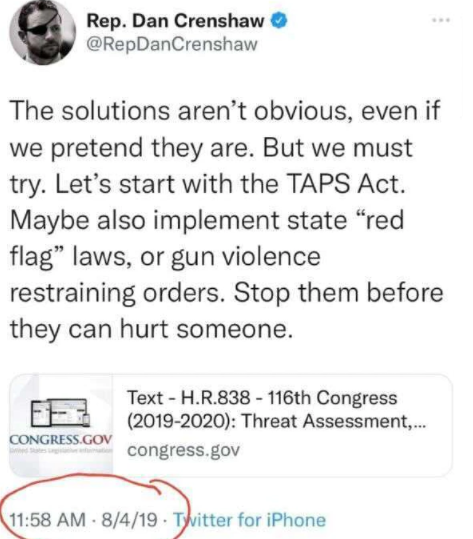 Big League Politics reported on how the TAPS Act was a disastrous measure pushed by RINO Republicans to allow the federal government additional ways to infringe upon the gun rights of law-abiding conservative Americans:

“The Threat Assessment, Prevention, and Safety (TAPS) Act introduced by Rep. Brian Babin (TX-36) in the House of Representatives and Senator Marco Rubio (FL) in the Senate does the following:

Despite its harmless title, many believe that the TAPS Act would serve as a pre-crime bill.

According to David Leach of The Strident Conservative, Florida Senator Marco Rubio’s version of the TAPS Act, S.265, would “encourage law enforcement to give EVERYONE a personal threat assessment (adults and children) and single out those they deem as future threats.” From there, this information could later be used to “stop dangerous individuals before they can commit an act of violence.”

Mark Angelides of Liberty Nation also opined on Babin’s statement and what it could potentially mean for civil liberties:

Crenshaw is earning his moniker of “McCain 2.0.” He is probably the most dangerous and disingenuous RINO in the entire federal swamp.