(Big League Politics) – Joe Biden’s White House staff privatized an upload of his inaugural address from the White House YouTube page, after the video was rationed with a wave of dislikes.

As of late Wednesday night, Biden’s Inaugural Address has more than 17,000 dislikes, and less than 4,000 likes. Sensing that the public wasn’t responding positively, the Biden administration made the video “unlisted” some time after its initial streaming. 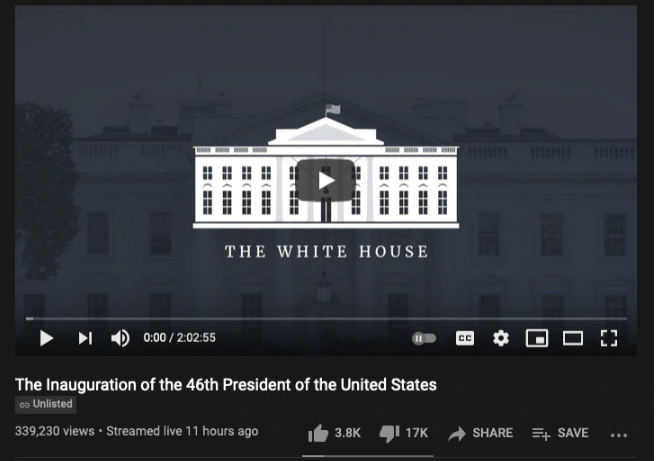 In a legally questionable development, the Biden White House staff have also disabled comments on the Inaugural Address. Court rulings previously forced the Trump administration to unblock fanatic liberal reply guys on Twitter, with judges ruling that they had the right to engage with the President on the platform.

The inaugural address is accessible here.

The poor reaction may have come in part from the existing YouTube subscriber demographic of the White House channel, which was primarily composed of Trump supporters. Other uploads of Biden’s Inaugural Address on the YouTube channels of mainstream media networks have a more favorable like-to-dislike ratio.

The takedown of the video could ultimately be challenged under a 2018 court ruling establishing presidential social media accounts as public forums, with comments enabled. Biden will have to face criticism- even on his official internet presence- as President.