(Big League Politics) – Data published by the United States Census Bureau reveals that Democrat-governed coastal states are shedding their populations in record numbers, with citizens of states such as California and New York packing up and moving to Republican-governed alternatives such as Florida and Arizona.

The 2021 Census data shows that California has lost nearly 400,000 residents and New York has lost almost 200,000 over the past year. Florida and Texas gained more than 100,000 new residents each, with Arizona and North Carolina gaining almost as many as much respectively. 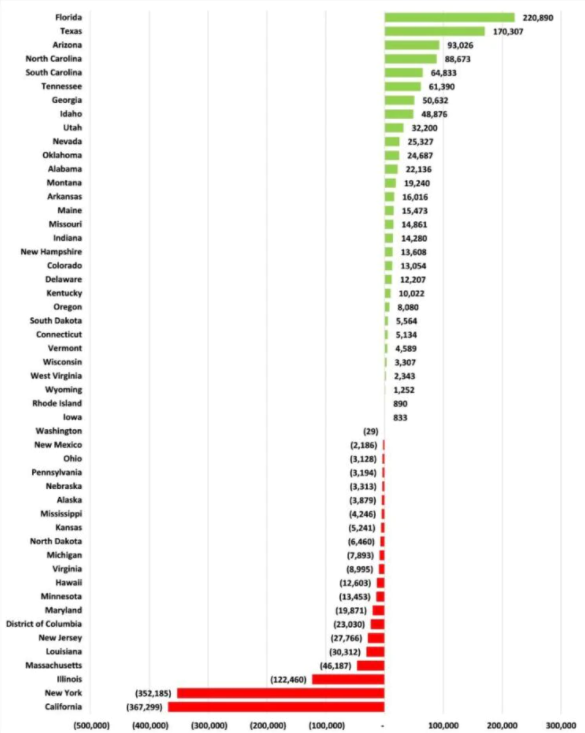 All five of the states suffering the highest losses in population have Democrat governors. Of the five states that gained the most new residents, only North Carolina has a Democrat governor, and it has solid Republican majorities in both chambers of its state legislature.

California had incurred the smallest population growth in the state’s history in 2020, but the state hadn’t outright lost population like it did in 2021. Both New York and California had lost seats in the House of Representatives due to declining shares of the national population gauged in the 2020 Census, with the former losing two seats.

Longtime residents of the state of California no longer recognize a state many of them liken to a third-world country, with Los Angeles consumed in a tidal wave of filth, homelessness, drug use, crime, and urban decay. Police union officials have frankly admitted they can’t protect tourists from petty and violent crime in the city, painting a sad picture of a civilization in decline.

The states losing the most in population also implemented the most fanatical of coronavirus mandates, with many residents tiring of the fake performative game of donning a pathetic and useless bib every time they walk into a liquor store, public school, restaurant or government building.