Dunn recited his lines for the camera and received plaudits from the fake news media for confirming their biases with his words:

'Is this America? I began sobbing’ — In powerful testimony to members of Congress, Officer Harry Dunn recounted the violent racial slurs he and other Black officers experienced on Jan 6 pic.twitter.com/CscLm10gBS

While the Left would like for Dunn’s histrionic screed to be taken as dogma, his past shows that he is an ultra-partisan Democrat who has cheered on Black Lives Matter (BLM) terrorism in communities.

In one response to Fox News anchor Tucker Carlson, he defended BLM mob thuggery over the death of a rapist who was resisting arrest in Kenosha, Wisc.

A screenshot of that post can be seen here: 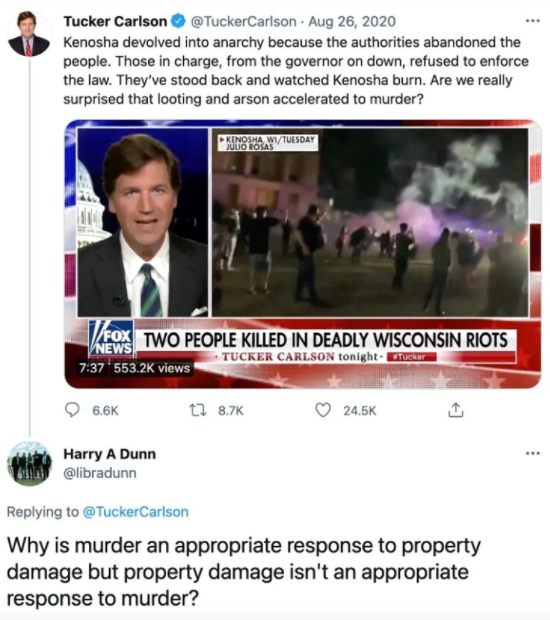 In other social media posts, Dunn defended anti-Christian and anti-semitic Rep. Ilhan Omar (D-MN) and laughed when former president Donald Trump was forced to retreat to a bunker in response to an actual siege on the White House by far-left agitators.

Is this the same Capitol Police officer who testified today?

Here are a few of his Anti-Trump tweets, including calling him "Racist in Chief" pic.twitter.com/7PCvGJerpb

Here's a tweet where Capital Police officer Harry Dunn joked and laughed about President Trump being rushed off the stage during a security incident. pic.twitter.com/7ntXyR4Cmv

Big League Politics has reported on how Pelosi’s sham hearings are being used as the basis for a permanent unconstitutional crackdown against the rights of Trump supporters:

“On Tuesday, the sham hearings about the mostly-peaceful protest in and around the U.S. Capitol on Jan. 6 began in the U.S. House, and they are even more revolting than expected.

House Speaker Nancy Pelosi (D-CA) called on Capitol Police officers who recited lines prepared to justify a sustained unconstitutional crackdown against Trump supporters. Having failed completely to secure the Capitol on Jan. 6, they want the focus off of their own incompetence on that fateful day.

DC Metropolitan Police Officer Michael Fanone poured on the histrionics, comparing what he experienced that day to “Hell”…

Rep. Adam Kinzinger (R-IL), one of the worst Trump critics in the entire GOP, actually started weeping during the hearing…

Rep. Adam Schiff (D-CA) attempted to muster tears while giving his testimony but could not produce them…

Rep. Liz Cheney (R-WY), who has consistently supported war crimes throughout the world, used the hearings to make the case to bring the war on terror home and use it against Trump supporters with Jan. 6 as a convenient excuse.”

Dunn will be remembered as Officer Jussie Smollett by the time these farce hearings are said and done. He failed to secure the Capitol on Jan. 6, being derelict in his duties, and now he lies in front of a camera to avoid culpability and push his political agenda. Dunn has failed his nation and should be forced to abdicate his post.