OUTRAGE: Top Doctor Gets BANNED for Speaking the Truth

(Big League Politics) – Dr. Robert Malone, a pioneer in the field of mRNA vaccine and skeptic of the COVID-19 vaccine regime, has been permanently banned from Twitter.

Dr. Malone has made many comments that contradict the Big Pharma-funded public health consensus on COVID-19 vaccines.

“We now know that the Pfizer protection is waning at 6 months, and what the data seemed to suggest is those who have received Pfizer – which is probably the least immunogenic of the 3 in terms of durability and length of protection – are now in the waning phase of the immune response and seem to be getting infected,” Dr. Malone said during an appearance on the War Room podcast in July.

“The government seems to be obfuscating what is happening here. I don’t mean to sound alarmist, but what it seems to be rolling out is the worst-case scenario where the vaccine in the waning phase is causing the virus to replicate more efficiently than it would otherwise,” he added. 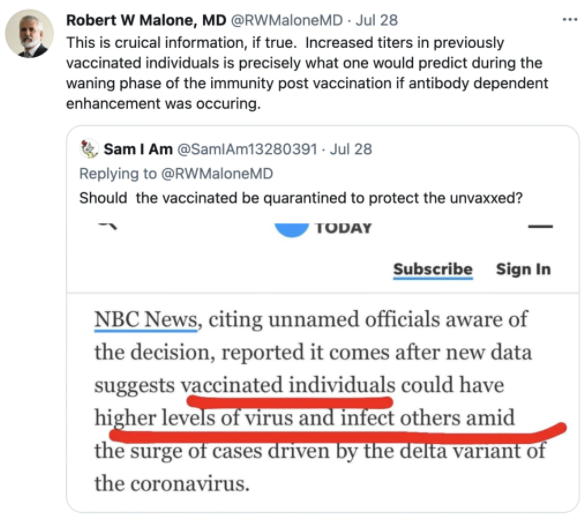 Big League Politics has reported on other high-profile whistleblowers who have emerged against the vaccine regime threatening the lives of billions:

“Former Pfizer chief scientist Dr. Michael Yeadon, who has emerged as a prominent whistleblower against the COVID-19 vaccine regime, has issued a dark proclamation for what is to come now that the technocracy is taking shape.

Yeadon wrote of what is to come on his Telegram channel considering major tech monopolies would never allow him to spread his message on their tightly-controlled propaganda platforms.

“The world economy has been reshaped, destroying big chunks of the aspirational middle classes as well as their predecessors. Billions of people are somewhere between unstable & clinically insane. Lockdown, masks, business closures. Immunity, PCR, vaccines, all lies or severely misleading takes on everything,” he wrote.

“The worst part, from my perspective, has been the Soviet level of propaganda, suppression & censorship. Not only main / legacy media but almost the entire internet is controlled by perpetrators,” Yeadon added, before asking: “Where is this all going?”

Yeadon believes that this is all headed toward a massive depopulation plan, which has long been speculated as being the capstone of the new world order.

“There’s a large group who genuinely don’t know what’s going on, a growing number of whom are stirring uneasily. They sense it doesn’t all add up. They won’t be initiators but could be recruited by an alternative narrative that’s not only plausible but true,” he wrote.

“Some others know we’ve suffered a global coup d’etat but are pinning their hopes on an outcome that just enforces restrictions. That’s just wishful thinking. Consider the ambition of this as well as it’s costs & risks. I don’t believe the return on that can be as limited as restricting our freedoms to fly, eat meat, to drive & to whack on the heating whenever we want,” Yeadon continued.

“So I’m with the catastrophists who think depopulation is by far the most likely. It’s depressing, because despite 18 months of attempts to point out the myriad obvious untruths being told, coupled recently with mass scale injuries & deaths, the lies continue thick & fast,” he added.”