REPORT: These are the Drug Cartels Who are FLOODING America with Drugs

(Big League Politics) – In an annual report that it recently released, the U.S. Drug Enforcement Administration identified nine Mexican drug cartels as the principal entities behind the flood of cocaine, fentanyl, heroin, marijuana, and methamphetamine into the country.

The following map from the Daily Mail highlighted the “spheres of influence” the cartels hold and where they have strong commercial interests in the United States. 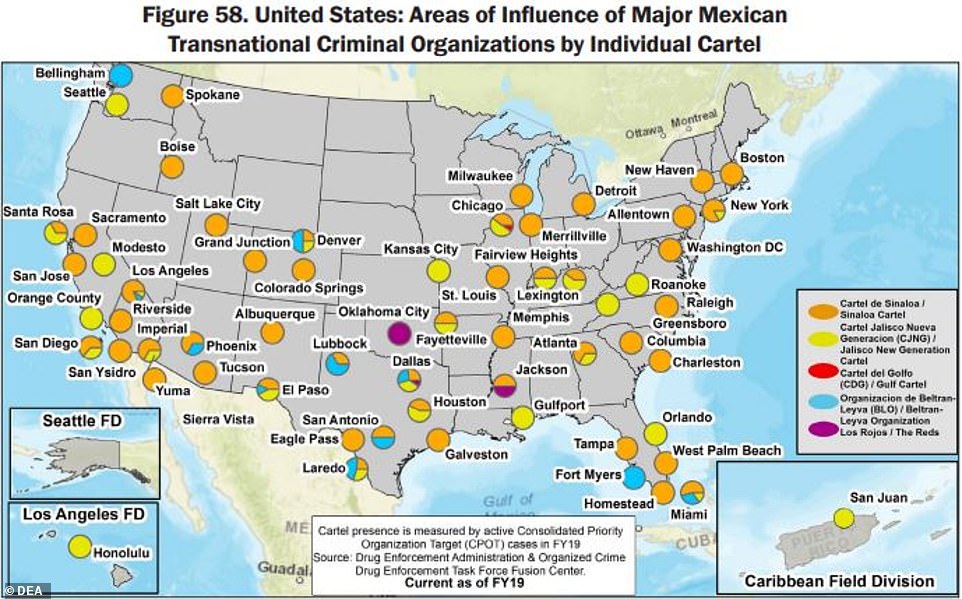 The map demonstrated that the Sinaloa Cartel — the cartel notorious drug kingpin Joaquin “El Chapo” Guzman Loera founded — and the competing Jalisco New Generation Cartel (CJNG) were the principal criminal syndicates transporting drugs and projecting their criminal influence into the US in 2020.

According to the DEA report, the Sinaloa cartel apparently controls smuggling routes in Arizona and California, while CJNG controls the Mexican port of Manzanillo for its smuggling operations.

“Mexican TCOs [transnational criminal organizations] are the greatest drug trafficking threat to the United States,” the DEA observed in the report.

“They control most of the U.S. drug market and have established varied transportation routes, have advanced communications capabilities, and hold strong affiliations with criminal groups and gangs in the United States.”

What was most striking about the DEA report was the continued strength of the Sinaloa Cartel, whose legendary co-founder Joquin “El Chapo” Guzmán is spending life behind bars at the Colorado super maximum security prison. The Sinaloa Cartel’s control on the sale and trafficking of drug across America has not slipped, as it has significant influence in 24 states and Washington, D.C.

The cartel employs gatekeepers assigned to Ports Of Entry and controls Arizona and California area smuggling corridors into the United States.

The rival CJNG outfit has business operations in 11 American states, along with Hawaii and the American territory of Puerto Rico. CJNG’s reach is strongest in Mexico, where it is present in 23 of Mexico’s 32 states.

The report discovered the following:

The CJNG smuggles illicit drugs into the United States by accessing various trafficking corridors in northern Mexico along the southwest border including Tijuana, Juarez, and Nuevo Laredo. The CJNG also has influence over the busiest port in Mexico, the Port of Manzanillo, and utilizes that influence for the distribution of large quantities of drugs.

Nemesio ‘El Mencho’ Oseguera is the head of the CGNC and is Mexico’s most wanted individual. He formerly worked under El Chapo. At the moment, the DEA has a $10 million reward for information that would lead to the capture of El Mencho or his conviction.

According to the DEA, the Sinaloa Cartel and the Jalisco New Generation Cartel have grown their criminals operations in their United States by forging business alliances with other organizations, which includes independent DTOs (drug trafficking organizations). The two cartel heavyweights partner up with transnational gangs, American street gangs, prison gangs, and Asian money laundering organizations.

In the DEA report, the Beltrán-Leyva Organization is reported to have operations running in six states, whereas the Los Rojos cartel is largely present in Oklahoma and the Gulf Cartel is active trafficking drugs in the state of Illinois.

One of the more surprising findings of the DEA’s report is that the Wuhan virus pandemic has not put a dent in the business efforts of drug cartels.

The Sinaloa Cartel and the Jalisco New Generation Cartel took advantage of the epidemic by cranking up the price of methamphetamine. This drug is known to be produced in secret drug labs in Mexico. So far, both of the cartel giants have scaled back their usual volume of meth deliveries, which has been a contributing factor behind the recent increase in its price.

The DEA reported that the bulk of heroin and fentanyl circulating in the United States is being smuggled into the country by way of its southwest border. Additionally, smaller amounts of contraband is brought stateside via couriers flying on commercial airlines.

The report expanded on how cocaine was being transported to the states:

Land transportation via the interstate system is the most predominant method of transporting illicit opioids, with personally-owned vehicles (POVs), rental vehicles, and trucks/tractor trailers identified as the most commonly used modes of transport. POVs are often retrofitted with concealed compartments that are used … to hide heroin, fentanyl, bulk currency, and other contraband.

At the same time, manufacturers in China are shipping fentanyl to drug dealers as well. The level of coordination between Mexican and Chinese nationals has raised some speculation about this activity being geopolitical in nature. In other words, party of Chinese grand strategy is to use non-state actors — drug traffickers — to undermine peer competitors such as the U.S.

“Fentanyl distributors in the United States also continue to order fentanyl, FRCs, and other synthetic opioids, such as U-47700, directly from manufacturers in China via the Internet including the dark web, with delivery accomplished by international mail and commercial parcel services” the report observed.

In the DEA’s 2020 National Drug Threat Assessment, Mexican cartels are portrayed as the greatest drug trafficking threat to the United States. Per the DEA’s figures, agents seized roughly 7,250 kilograms of heroin in the Fiscal Year 2020.

Mexican cartels are no joke. Mexico’s collapse in public order and America’s lax border enforcement has allowed cartels to have free reign in both Mexico and America.

Forget about whatever is going in the Middle East or in the South China Sea, the real threat is right across our border. If America had a serious foreign policy, it would be investing profuse amounts of money to bolster its border security and also provide military aid to Mexican non-corrupted institutions and actors that can combat Mexican cartels and related criminal entities.