(The Post Millennial) – Duped by a troll account, US and Australian journalists have spread misinformation that Proud Boys are traveling to eastern Europe to fight for Russia.

“We have lift off! See you when we return Australia. Brothers staying behind look after this great nation. We will return with great gifts for all! #Ukraine #bridewive,” troll account “Proud Boys Southern Tablelands” tweeted Friday. [The account had around 10 followers at the time of the tweet.]

The clip uploaded by the Twitter account is taken from an old video posted by a YouTuber in 2018 flying from Sydney to Hong Kong.

The same troll account also posted: “Proud Boys Southern Tablelands is sending a group of 8 of their best on a flight from Sydney to Poland 1610 tomorrow. We will be rendezvousing with our Brothers from Proud Boys chapters all over the world and be making our way by foot to Ukraine to help Vlad. Pray for us. Uhuru!”

Predictably, the mainstream media took the bait. Before long, the hoax was soon picked up and spread by blue check personalities on Twitter who expressed collective shock and outrage that the right-wing group would attempt such a feat. 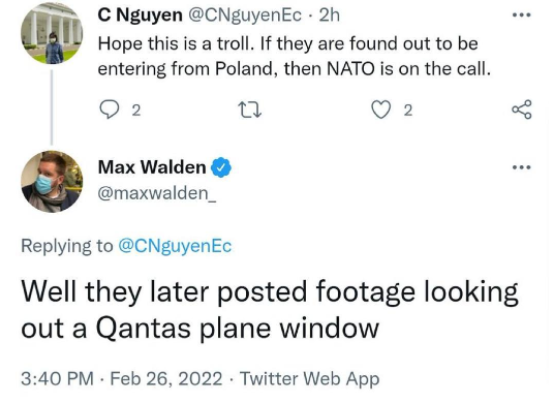 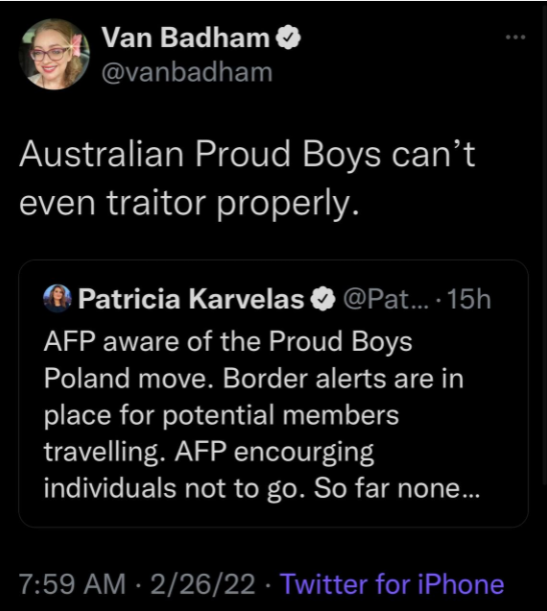 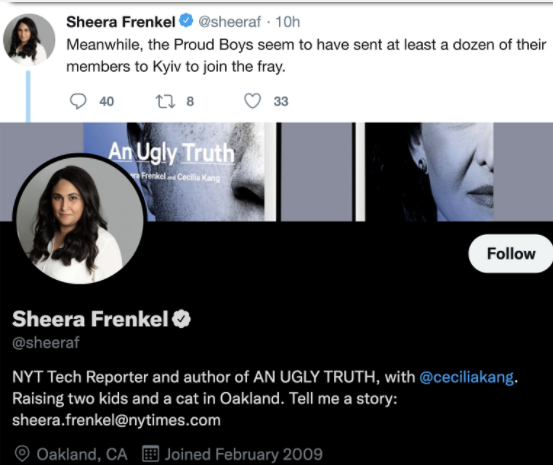 Frenkel tried to substantiate her reporting that Proud Boys may be sending fighters to Ukraine based on their Telegram posts, The Post Millennial’s editor-at-large Andy Ngo reported. “For those asking, a number of Proud Boys channels are posting videos and photos of themselves allegedly in Ukraine. I can’t independently verify their location, which is why I am phrasing this carefully.”

According to Ngo’s screenshots, the messages from the “Kyiv Proud Boy Chapter” say statements like “Please keep all travel receipts for reimbursements from the Trump Foundation” and “Just returned from my meeting with Putin.”
Ngo noted that even leftist accounts admitted it’s a hoax.

Even now leftists are admitting it was a hoax. https://t.co/r2nlpPp4ws pic.twitter.com/hzxI6qBu9M

“[T]hat a troll tweet from a proud boys account with 10 followers made it to the AFP, NYTimes reporters sharing it & pro-fascist Andy Ngo using it to undermine faith in the media shows why we should be careful when we interact with claims from people who want to hijack our attention,” a leftist Twitter account wrote.