(Big League Politics) – The Federal Aviation Administration has imposed a ban on flights above an international bridge in Del Rio, Texas, effectively preventing video and photo footage of the mass illegal immigration flooding across the crossing from Mexico.

NEW: We’ve learned that the FAA just implemented a two week TFR (Temporary Flight Restrictions) over the international bridge in Del Rio, TX, meaning we can no longer fly our FOX drone over it to show images of the thousands of migrants. FAA says “special security reason”. pic.twitter.com/aJrjAPO2Pz

The FAA claims a “special security reason” justifies the de facto censorship of photojournalism. Some speculated that the federal government wants to muzzle reports of the chaos on the bridge to the public.

Photography of the bridge site consistently reveals large masses of illegal aliens unmasked, many of whom are vaccinated. Critics of the Biden Administration’s “America Last” border and immigration policy pointed to the President’s hypocrisy in permitting the mass gatherings for illegal immigration while restricting the daily activities of American citizens. 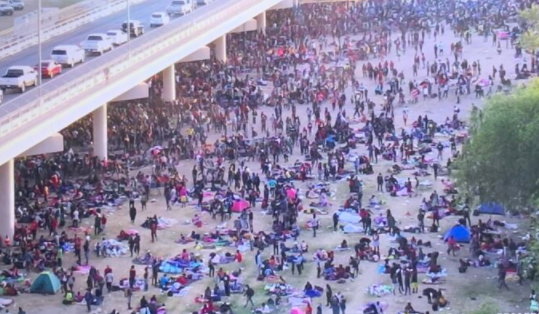 The Del Rio bridge crossing has become a flashpoint for mass illegal immigration from countries such as Haiti and Venezuela, with photos documenting the porous nature of the crossing and free reign of illegal aliens to enter the United States. The Biden administration has thus far declined to reinstate President Trump’s ‘Remain in Mexico’ game-changing asylum policy, requiring illegal aliens to file their claims in the asylum system while in Mexico.