(Big League Politics) – Portland ANTIFA commemorated Joe Biden’s Inauguration with a mass-scale vandalism and riot operation, even attacking the headquarters of the Oregon Democratic Party in a protest of Biden’s right-wing “fascism.”

The Democratic Party Of Oregon building was vandalized moments go by an Antifa group in Portland Oregon. The group gathered at Revolution Hall and blocked roads off as they made their way towards the building pic.twitter.com/joDxZ30yA0

More video of the damage showed the mob’s coordination.

Portland Mayor Ted Wheeler has actually started talking about cracking down in Antifa in recent months. Will the attack on the Oregon Democratic Party give him the event he needs? pic.twitter.com/4cmM4tU7gs

Banners carried by the mob expressed their lust for “revenge.” 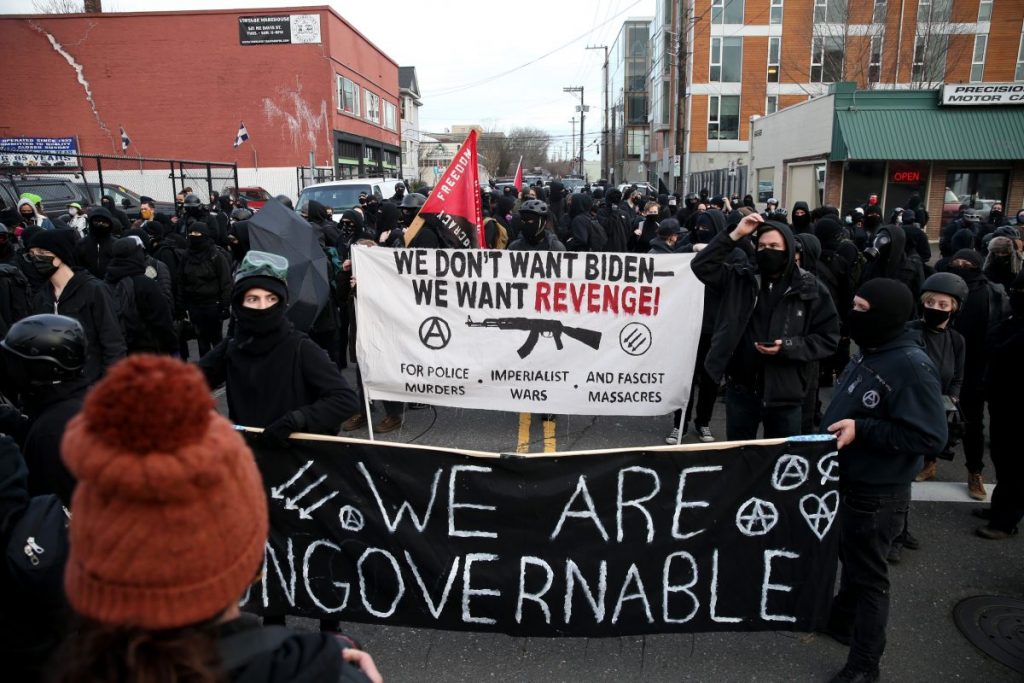 ANTIFA militants also appeared in force in the city of Seattle, carrying out a “J20” mob action in a manner roughly akin to what was seen on the day of Donald Trump’s Inauguration in 2017.

American flags are burned on the streets of Seattle as part of tonight’s J20 Direct Action #Seattle #SeattleProtests #J20 pic.twitter.com/DTL9CzEHnF

An Amazon store in Seattle was later targeted by the mob.

Some “polite” Democrats have begun to hope that the most uncouth of their ANTIFA pets will quietly go away, but from the looks of it in Portland, the riotous and socially maladjusted street crime gang doesn’t intent to go out silently. Feckless Portland Ted Wheeler even seems to have had enough, forcefully calling for buffed criminal penalties to those who carry out ANTIFA violence in a speech earlier this month.

With Trump seemingly out of the picture, it’s possible that neoliberal mayors and local governments will quickly move against the most undesirable elements of their own political coalition. If not, the political violence group could perceive continuing immunity from prosecution as a sign of weakness, enabling them to continue a reign of street terror perhaps unprecedented in modern American political history.