WATCH: Biden SNAPS… He NEVER Wanted This to Go Public

(Big League Politics) – A poll released by Rasmussen Reports last week indicates that Americans overwhelmingly prefer former President Donald Trump’s immigration policy to that of Joe Biden, with the former building a wall and sharply cutting back immigration. Joe Biden broke a single-year record for apprehensions of illegal migrants last week, indicating that more illegals have infiltrated the nation’s border under his reign than ever before.

A majority of 51% of Americans think Trump’s immigration policies were better than Biden’s. Only 32% prefer Biden’s ‘America Last’ approach, with 11% viewing the two presidents as the same. 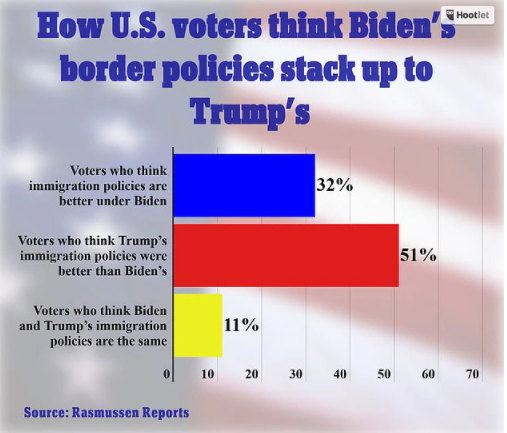 Criticism of Biden’s immigration policies have come to a head in light of a prolonged migrant siege of the US border at the Del Rio International Bridge. Biden administration officials initially said the migrants would be deported, before going back on their commitment and granting more than half of the Haitian migrants US residency.

Polls around the election had indicated the American public was increasingly willing to consider pro-immigration policies, but it appears a taste of Biden’s open borders- a similar some political commentators compare to the realization of the 1973 book The Camp of the Saints. Immigration has proven to be a potent swing issue, driving Independents away from Biden and the Democrats, and potentially opening up a window for pro-immigration restriction candidates like Arizona’s Blake Masters and Ohio’s JD Vance.

Rasmussen proved to be the most accurate pollster in the 2020 election, predicting a close race whereas most mainstream media pollsters predicted a blowout on the part of Biden. The poll surveyed 1,000 voters from September 28-29.