WHAT?! Clothing Store Closes for 3 WEEKS to Cure ‘White Supremacy’

(The Post Millennial) – A retail store in Portland, Oregon announced on Saturday that they will be closing their store for three weeks to undergo training to cure “white supremacy” after feeling remorse for firing a BIPOC employee.

“After deep consideration, we have decided to close Artifact’s doors for the next two to three weeks, effective immediately, February 26th. After letting a BIPOC employee go, it was brought to our attention concerns of microaggression and racial biases within the store. We value our employee’s experiences and do not take their words lightly,” the retail store Artifact said in an Instagram post on Saturday.

A Portland clothing shop apologized for firing a BIPOC employee and announced they will close for 3 weeks to conduct racial equity, white supremacy and microaggressions education. This announcement is peak leftist virtue signaling. pic.twitter.com/ZM1uYeFJYV

The retail store went on to list a series of steps that they will be taking to cure “white supremacy” which include hiring an independent BIPOC investigator that will suggest changes so Artifact can work towards an antiracist future, educate its management team on racial-equity, implicit bias, white supremacy culture, and identifying microaggressions, and will hold company-wide trainings. 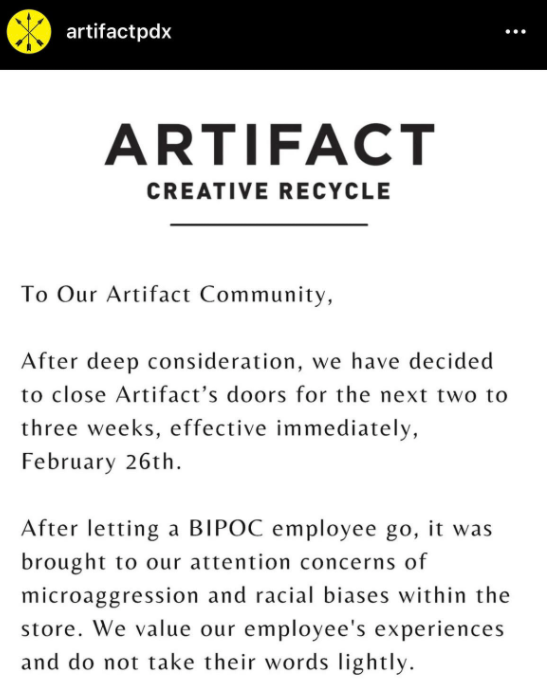 Artifact added that their goal is “to create an inclusive, creative safe space for all” and said that they made the “hard” but “necessary” decision to temporarily close the store. 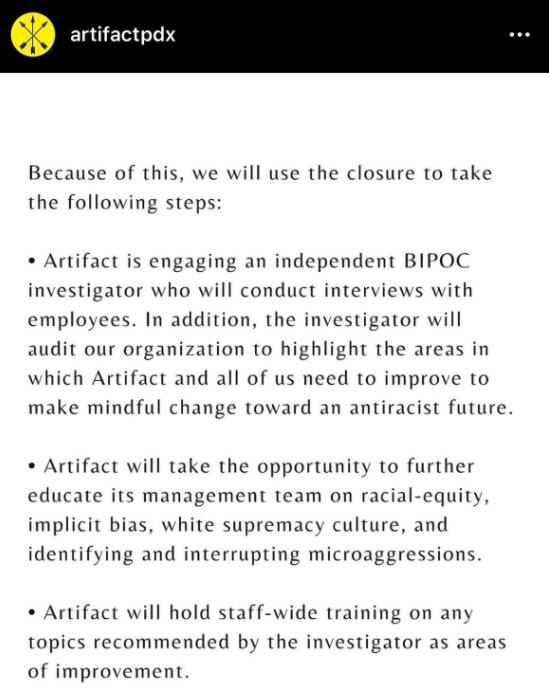 The Portland-based company did not make it clear as to why they chose to fire the BIPOC employee and whether or not they allowed the individual to remain employed at the store.